In 1916, tire magnate and Akron resident Harvey Firestone came up with the idea for a “road trip” for himself and three of his pals – inventor/innovator Thomas Edison, auto manufacturer Henry Ford and naturalist John Burroughs.

On this its 15th anniversary, the Society’s Road Rally acknowledges the “vagabonds” and their summer “caravans” of the early 20th century and invites those with a wandering, adventuresome spirit (not unlike Firestone and his friends) to participate in the race.

Set for Saturday, Sept. 14, this year’s Road Rally will meander through Summit County highways and byways to the Spicy Lamb Farm in Peninsula in a back-to-nature voyage. Spicy Lamb Farm is the winter home of the Society sheep.

Society President and CEO Leianne Neff Heppner promises a route that is both scenic and challenging. For those who wish to participate in the rally, registration and sign up begins at 4 p.m. at the Perkins Stone Mansion, 550 Copley Road, Akron.

For those who prefer to commune with nature, there’s an afternoon at the Spicy Lamb Farm at 6560 Akron-Peninsula Road in the heart of the Cuyahoga Valley National Park. There will be sheep, ducks, rabbits, border collies (yes, Rudy, Luke, Lincoln and Owen will be there) and horses, hiking along the trails, munching on apples and waiting for the Road Rally participants to roll in. Guests not driving the route may arrive by 5:15 p.m. at the farm and should dress for the weather.

After that, there’s games, dinner, drinks, a silent auction, and great conversation as the Society celebrates its 95th anniversary and looks back on the original “vagabonds” of another time and another century.

The Road Rally is one of the Road Rally’s major fundraisers. In honor of the 95th anniversary of the Society, members pay $95 and non-members pay $110. To make reservations, call the Society at 330-535-1120 or get your tickets and map to the Spicy Lamb Farm at eventbrite.com. 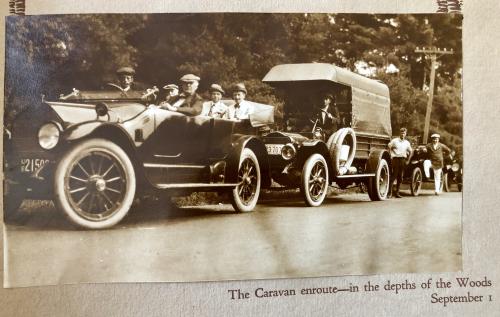