Akron-Summit County Public Library will join with a coalition of history and education organizations to sponsor a Facebook Live event from 7:00pm – 8:00pm on October 5 on the Library’s Facebook page, featuring interviews with founders of the commemorative event and their American Indian colleagues.

“COVID 19 has had significant spread among Native American communities,” said Sam Chestnut, Head of the Lippman School. “This year, we hope to tell stories about our American Indian friends by going virtually to their reservations in Montana and New York State.”

Participants in the Facebook Live event include Chestnut and Matt Russ of the Lippman School along with Akron historian Dave Lieberth who co-founded the initiative five years ago. They will be joined in the live conversation by LaDonna Blue Eye, an enrolled member of the Choctaw nation and a member of the coalition, and representatives of Indian nations appearing virtually on the program.

North American First People’s Day was created in 2018 when students at The Lippman School prompted Akron City Council to set aside the first Monday in October as a tribute to American Indians. The school has a longstanding exchange relationship with the Northern Cheyenne Nation of Montana. In 2019, Summit County Council extended the celebration to the entire county. The Akron commemoration is guided by the Portage Path Collaborative, an assembly of educators, organizations and individuals committed to preserving and sharing the history of the First People of Summit County. The group includes The Summit County Historical Society, The Lippman School, Summit Metro Parks, and The University of Akron Institute for Human Science and Culture/ Cummings Center for the History of Psychology.

Over the past five years, a symbolic walk along the Portage Path allowed students to learn more about the native people who used the ancient portage. The trail was created by indigenous people who populated the area for millennia before the first Europeans arrived and is one of the oldest, most visible landmarks on the North American continent – an 8-mile trail crossing the watershed divide between the Cuyahoga River and Tuscarawas River, marked by fifty broad blades from the Merriman valley to the new site of Confluence Metro Park.

It was marked by the Summit County Historical Society in 2001 for the first time with monumental sculptures at each terminus of the Path created by the Onondaga-Seneca artist Peter Jones, who has been a guest speaker at the Akron commemoration in 2019 and 2018. Jones, a resident of the Cattaraugus Reservation in New York will also appear in the Facebook Live event via the internet.

Akron Public Schools has incorporated studies of Native Americans into their history curriculum at the elementary and secondary levels. Teachers are encouraged to invite students to watch and participate in the Facebook Live event October 5. In 2019, the Collaborative conducted In-school activities with appearances by Indian nation representatives, reaching some 2,000 students.

Students from Lippman, Portage Path CLC and the Cheyenne Nation joined together to create a web-based mobile “app” that provides extensive information about the Indian trail, including its history and the natural world that it traverses. The app can be accessed at www.walkportagepath.com. 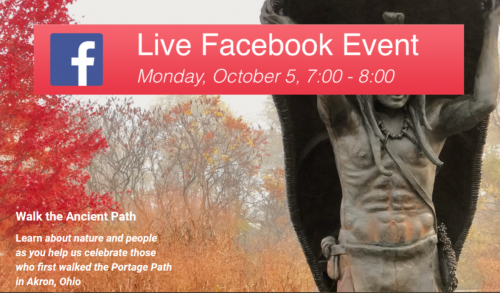