(Akron, Ohio. August 14, 2019) The Portage Path – Akron’s oldest landmark and a tribute to the Native people who first occupied the land here – will be celebrated in a series of events Friday, October 4 through Monday October 7, Akron’s second annual “North American First People’s Day.”
The Portage Path was created by indigenous people who populated the area for millennia before the first Europeans arrived and is one of the oldest, most visible landmarks on the North American continent – an 8-mile trail crossing the watershed divide between the Cuyahoga River and Tuscarawas River.

A coalition of history and education organizations has planned a weekend of events to commemorate North American First Peoples Day, which for the first time will feature in-school presentations by representatives of Indian nations to Akron Public School classrooms; and special hours will be featured for a new exhibit of Native American art and artifacts at the University of Akron’s Institute for Human Science and Culture at the Cummings Center for the History of Psychology. The weekend of events includes:

11:30 am - Walk the Towpath trail, guided by Summit Metro Parks archaeologist, from the parking
area of Big Bend Metro Park 1337 Merriman Rd., to the northern terminus of the Portage
Path.

1:30pm - A 1 kilometer walk will begin at Portage Path CLC, 55 S. Portage Path and will be led by the
Northern Cheyenne, who will be drumming and dressed in regalia. The walk will end at the
Perkins Stone Mansion

2:00pm - Drumming and dancing, Perkins Stone Mansion, 550 Copley Road. There is no admission
charge and the public is welcome to attend.

BACKGROUND
- In April, 2019, Summit County Council unanimously agreed to extend the celebration of American Indian
heritage to the county, mirroring a resolution adopted by Akron City Council in 2018 declaring the first
Monday in October as a day to honor Indian history, life and culture. The initiative was prompted by
students at The Lippman School of Akron, which has a longstanding exchange relationship with the
Northern Cheyenne Nation of Montana.

- The entire length of the portage was marked by the Summit County Historical Society in 1999, when for
the first time monumental sculptures at each terminus of the Path were connected over the 8-mile trail by
fifty markers in the shape of historic Indian broad blades.
- Students from Lippman, Portage Path CLC and the Cheyenne Nation joined together in 2016 to create a
web-based mobile “app” that provides extensive information about the Indian trail, including its history and
the natural world that it traverses. The app can be accessed at www.walkportagepath.org.
- The activities are sponsored by The Portage Path Collaborative, an assembly of educators, organizations
and individuals committed to preserving and sharing the history of the First People of Akron and Summit
County. The group includes: The Summit County Historical Society, The Lippman School, Summit Metro
Parks, The University of Akron Institute for Human Science and Culture/ Cummings Center for the History
of Psychology, and Stewards of Historic Preservation..
- A publication outlining the historic trail and the history of Native peoples who used the Portage Path has
been published, and is free and available at the Historical Society and at Metro Parks’ F.A. Seiberling
Naturerealm.
- The sculpture of a Native American portaging a canoe was designed and sculpted by Peter Jones who
resides and works on the Cattaraugus Indian Reservation near Versailles, New York. He graduated from
the Institute of American Indian Arts in Santa Fe in 1965. In February, 2018 Jones received the
Community Spirit Award, a national recognition of exceptional artists who have shown a lifetime
commitment to perpetuating their art and to restore and pass on ancestral knowledge and traditions,
connecting Native peoples to their greatest assets. 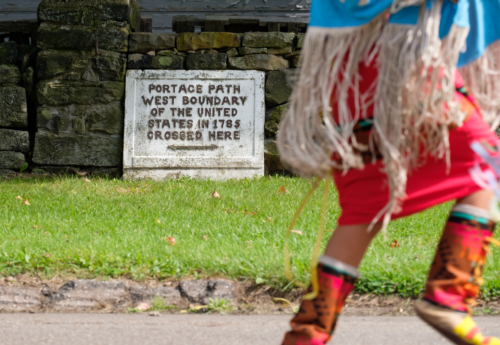