The Women’s History Project of the Akron Area, a program of the Summit County Historical Society, will honor nine local activists with its Woman of the Year awards for 2022 at a special presentation at the John Brown House in June.

They will be honored at a special presentation on June 15 at the John Brown House, 514 Diagonal Road, Akron. Heather Pollock of the University of Akron will be the emcee.

Society President and CEO Leianne Neff Heppner explained, “The Women’s History Project is honored to recognize these women, who through their selfless work, paid and volunteer, supply an essential need…hope.” In the words of Mother Theresa, “Hope sees the invisible, feels the intangible and achieves the impossible.” Leianne added.

Congratulations to the 2022 recipients:

Darlene Anderson–Katz, of Dare to Love More (DLM) Food and Resources, Faith award
Darlene Anderson-Katz’s work with Dare to Love More (DLM) Food and Resources caps a lifetime of benevolent work in the Akron community. From working with Shelter Care (residential program), American Greetings’ Christmas Families Program, One Piece Ministries to DLM, Darlene has built on her faith to assist families in crisis. DLM is a collaboration of Holy Trinity Lutheran Church, Project Rise and One Piece Ministries. Darlene went from volunteer to director of the program, steering the group through the pandemic, offering help and hope to more than 100 families.

Denise Brandon & Regina Rae King, cofounders and coaches of West Akron Track Club, Perseverance award
It’s only right that Denise Brandon and Regina Rae King share the perseverance award. The two have shared so much. Both are graduates of Buchtel High School. The two may have taken different career paths, Denise into nursing and Regina into hair styling, but the two shared a vision, which became the West Akron Track Club. Started in 2000 to teach the fundamentals of track and field while encouraging sportsmanship, the club has trained hundreds of young Akron athletes. Some have become national champions and medalists. In 2018 and 2019, the club was named one of the top 100 teams in the country. Denise and Regina remain volunteer coaches at the organization they founded.

Lisa Mansfield, education leader and community activist, Courage award
Courage comes in many different forms. Lisa Mansfield has shown courage in many different ways. A life-long resident of Akron (graduate of North High School and The University of Akron), Lisa showed courage as she formed an online support group for military spouses during the Iraqi war, led a LaLeche League support group for new mothers, helped at-risk students stay in school and assisted nonprofits connect with Summit County seniors. But most voters know her as a member of the Akron Board of Education. For three terms (her last ended in 2021), she was an outspoken advocate for the students and teachers. Lisa is now a Community Outreach specialist for Judge Elinore Marsh Stormer’s Summit County Probate Court.

Kathleen M Meyer, founder/president of Peace Together Choir and hospice nurse, Creativity award
Kathleen M. Meyer’s work with the Peace Together Choir is an extension of her work as a hospice nurse. In 2000, unable to find the right collection of hymns and songs to bring the healing power of music to her patients and their families, Kathy “pieced together” the Peace Together Choir. She recruited friends, hospice workers and local musicians to record music that would be comforting and peaceful. Since then, the group has recorded six CDs with proceeds of the sales going to Hospice, Visiting Nurses and other charities. To hear the choir’s message of hope and comfort, visit hopefulmusic.com.

Julia Perry, composer/conductor, Posthumous award
Born in Lexington, Ky., but living in Akron most of her life, Julia Perry is one of the greatest classical music composers/conductors that the city has ever produced. A graduate of Spicer School, Central High School (1942) and Westminster Choir College (B.A. and M.A., Princeton, NJ), Julia reached initial success in vocal works and then to orchestral works. She also conducted a number of major symphonic orchestras, including the BBC Orchestra in England. She died at the age of 54 in Akron in 1979. Akron’s Symphony Orchestra will perform several of Julia’s works this season.

Ellen K. McWilliams-Woods, PhD, chief academic officer, Akron Public Schools, Innovation award
For 33 years, the Akron Public Schools has benefited from Ellen K. McWilliams-Woods innovation in the classroom and the academic offices. Ellen joined Akron Schools in 1989 as deaf education teacher and will retire as chief academic officer/assistant superintendent for curriculum and instruction. Her innovative programs are varied: designing a new school-based Medicaid program for students with disabilities, beginning the first Ford Next Generation Learning community in Ohio, and setting up (and helping staff) the afterhours support center during the pandemic.

Virginia Wojno-Forney, preservation activist, Imagination award
There are few limits to Virginia Wojno-Forney’s activism or imagination. For decades Virginia has been a force behind some key institutions in the city, including Summit County Historical Society, Progress Through Preservation, St. Paul’s Episcopal Church and the Akron Art Museum. But it is at the Cascade Locks Park that Virginia’s imagination is most apparent. Back in the 1980s, she saw the potential of a canal-era provisions store, the ruins of a series of step locks and the overgrown trashy urban jungle and saw a park where Akron could rediscover its canal history. Today, Cascade Locks Park, “a heritage park for Akron’s future,” is a testament to Virginia’s vision of what could be.

Janis A. Worley, community volunteer and documentarian, Integrity award
Janis A. Worley is a community activist who works with many different non-profit organizations, including Akron Children’s Hospital’s Women’s Board, the Junior League of Akron, Old Trail School, Ronald McDonald House of Akron and the Summit County Historical Society. She is also a documentarian, having won the National Gracie Allen Award for Best Documentary for “Heart of a Nation” from the Alliance for Women in Media. She is correctly Finance and Operations Manager for First Congregational Church of Akron.

Reservations for the June event are required through EventBrite.com. 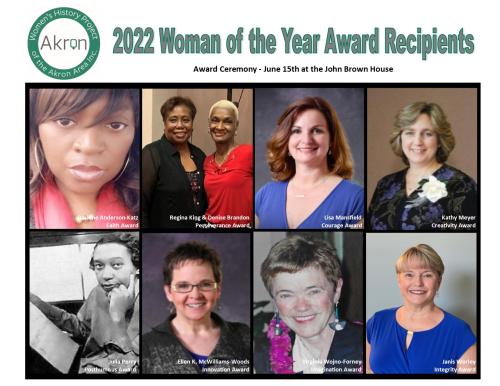