In 1844, abolitionist John Brown, soon to win fame in Kansas and at Harper's Ferry, moved into a two-room cottage across the street from the Perkins Mansion. He remained there while working with Simon Perkins, Jr., in the wool trade. Brown moved on and the house was used for other activities, but his name has remained associated with it for over a century. 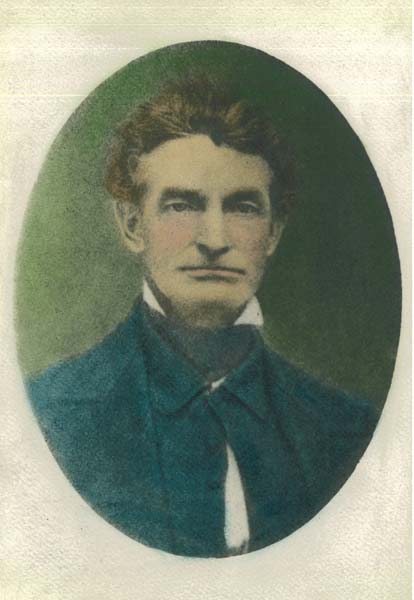 John Brown was born in Torrington, Connecticut on May 9, 1800 and moved to the Western Reserve with his family in 1805. He grew up in Hudson and there he learned how to be a tanner or leather maker. He married his first wife, Dianthe Lusk, in Hudson.

Afterward, he moved to Pennsylvania, but his tannery there did not succeed. His first wife, Dianthe, died there and the widowed John married Mary Ann Day. He and Mary moved to Franklin Mills where John entered into a partnership with Zenas B. Kent in 1835, with the idea of building a tannery along the banks of the Cuyahoga River.

Unfortunately, John Brown and Zenas Kent did not have a good partnership, and eventually they stopped doing business together. Around this same time, though, a number of investors planned to start a new company, the Franklin Land Company, with the goal of turning Franklin Mills into a major industrial city. The idea was to raise silk worms and create an American silk industry. After all, the silk worms' major food source, the mulberry tree, grew extremely well here. (Later, of course, they would discover that silk worms do not thrive in cold Ohio winters.) Then other industries would follow and the economy would boom.

In any case, John Brown believed that real estate in Franklin Mills was going to be extremely valuable, and that by investing early, he would end up a wealthy man. Brown borrowed large sums of money, bought over 95 acres of land, and waited for his investment to pay off.

Instead, in 1837, the entire nation was caught up in an economic crisis. Franklin Mills never developed into a major industrial metropolis, and John Brown was driven to bankruptcy. Eventually, Brown would leave Franklin Mills, returning to Hudson, then Richfield.

He switched his career from tanning leather to raising sheep. While at Richfield, he was offered employment by Simon Perkins of Akron and moved his family there. In Akron, Brown formed a partnership with Simon Perkins. Representing the firm of Perkins and Brown, he went to Springfield, Massachusetts, to try and sell Western Reserve wool. The venture was soon in trouble, and Brown traveled to Europe to try and salvage the business. He failed, Perkins asked him to continue working in Akron but and John and his wife Mary moved to the Adirondack Mountains in New York, building a farm in the hamlet of North Elba.

Eventually, Brown would end up involved in a bloody conflict in Kansas Territory between those who hated slavery and those who favored it. Brown began using violence to reach his goal, which led him to the infamous slaughter of pro-slavery advocates at Osawatomie. There is some evidence that after Brown's bloody raid at Ossawatomie Creek in Kansas, citizens of Akron raised cash and contributed weapons to Brown when he returned to describe his passionate fight against slavery in the summer of 1856. Akron historian Karl Grismer believed that cases of arms stored in the Summit County Jail made their way into Brown's hands.

Brown ended up fleeing the country, taking refuge at Chatham, Ontario. By the summer of 1859, John Brown decided to do something about slavery once and for all. Returning to the United States, he and a group of others decided to raid a federal arsenal in a place called Harpers Ferry, Virginia, which is now in West Virginia.

The raid, which took place on October 16, 1859, was a failure. Brown was captured, put on trial, and condemned to death for his actions. On December 2, 1859, John Brown was hanged at Charles Town, Virginia. His body was sent to New York State to be buried on the grounds of his farmhouse in North Elba.

While John Brown's raid on Harpers Ferry was unsuccesful in ending slavery, it did force the nation to pay attention to the issue. The national controversy over Brown's trial helped fracture the Democratic Party, which helped Republican candidate Abraham Lincoln win the election of 1860. Unhappiness with the results of that election led, in part, to South Carolina deciding to secede from the United States, an action which led in turn to the Civil War.