The Society will open its John Brown House and Perkins Stone Mansion for the 2019 tour season on Wednesday, April 3rd. This year's theme is "Walk a Mile in Someone Else's Shoes." Guests will be able to learn about abolitionist John Brown, the Perkins family and individuals in Akron and Summit County.

The John Brown House was closed last season while restoration and rehabilitation projects were completed.  A new exhibit will open in the space to coincide with John Brown's birthday on May 9th.  That event is scheduled for 5:30 p.m. and it is free and open to the public.  Woodrow Nash, local resident and internationally recognized artist, will be placing five busts in the house representing the African American men who served in Brown's army during the raid on Harpers Ferry in an attempt to end slavery in the United States.

Jenn Kidd will guest curator a temporary exhibit in the Perkins Stone Mansion with Denise Lundell featuring vintage shoes in the permanent collection.  "A Girl Can Never Have Too Many Shoes," will also include hats and purse accessories.

Tours will be available Wednesday - Saturday from 1-4 p.m.  Visitors may choose to have a guided or self-guided tour of the Perkins Stone Mansion before going to the John Brown House for a discussion on Akron and Summit County's most recognized individual from the preCivil War era. 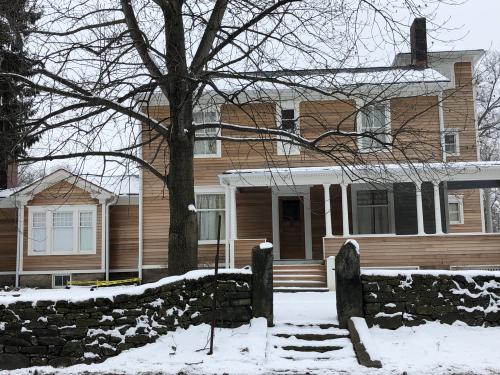